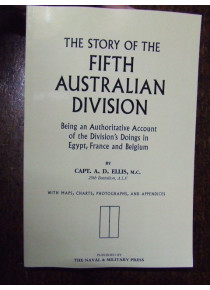 THE STORY OF THE FIFTH AUSTRALIAN DIVISION: Being an Authoritative
Account of the Division's doings in Egypt, France and Belgium ' by Captain A.D.
ELLIS MC .﻿

THE STORY OF THE FIFTH AUSTRALIAN DIVISION: Being an Authoritative
Account of the Division's doings in Egypt, France and Belgium ' by Captain A.D. ELLIS MC .
The Author, Alex Ellis joined the 31st Battalion on the 16/3/1915. Later transferring to the 29th Battalion. As he was a school master, he was offered an Officer's commission of 2nd Lieutenant. Ellis was awarded the Military Cross for distinguished service as a Divisional Bomb Officer in January 1918. He was with the Battalion at the Battle of Fromelles 19th July 1916.

He said of Fromelles,(writing of the 5th Divi, 8th Brigade),"... had been set a task which, as it turned out, was beyond the power of man to accomplish,and like the 15th, it achieved in its failure a renown that will never die, a glory that cannot pass away. It tried and died."

When the book was released in 1920 the Argus Newspaper wrote,"Those who fought with and alongside the 5th Australian Division are fortunate that Captain A. D. Ellis, M.C., became the unit's historian, because in him are combined unusual powers of observation with a graphic pen. He was, on the other hand, lucky to be attached to a Force that forged so many links in the chain of the Commonwealth military history. The vivid account of the battle of Fromelles, a summary of which was published in "The Argus" of Saturday last, will have given some indication of the forceful writing Captain Ellis has woven into "The Story of the Fifth Australian Division" (London: Hodder and Stoughton), which must be regarded as one of the most authoritative records of the war. Many incidents that puzzled "the man who stayed at home" have been explained in this volume, and new light has been thrown upon other occurrences that could only be half illuminated during the war. "

There is a chapter of 31 pages dedicated to Fromelles in this book. The battle was responsible for one of the greatest losses of Australian
lives in one 24-hour period. The 5,533 Australian casualties (1917 deaths),
including 400 prisoners, were equivalent to the total Australian losses in the
Boer War, Korean War and Vietnam War combined.

This History was compiled and written by Ellis in 1920. This book being offered is a professionally produced reprint of that history. It is a true reproduction of the 1920 1st edition.
My guess, is that an original 5th Division book in reasonable condition would cost $600 to $1000. Even these reprint books will escalate in value when they also become out of print. Detailed text with b&w pic Illustrations, maps, charts ++++.

Has individual named Gallantry Award roll (including Mention in Despatches) for all of the battalions. Also individual named death roll in battalion order.
A prime source for genealogists and military historians. 5th Div. medal or genealogy
research !
Don't miss this one

Click to read more about the 5th Division AIF.