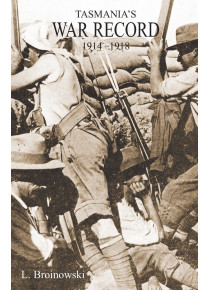 Very useful record for anyone researching a Tasmanian WW1 Veteran - not only for the names and details given, but for the historical accounts of the various units and fields of service.

The comprehensive Appendixes list:; - District Enlistments - Summary for about 400 Tasmanian towns giving town population, number of enlistments and number who died from each - Decorations - summary of the various awards and the numbers of recipients - Tasmania's Muster Rolls. These generally give name, rank, date of enlistment, length of service, rank on discharge and other remarks - nearly 90 Nurses - approx. 12,500 Officers, N.C.O's and Men - over 90 Tasmanians who enlisted in other states Maps and Photos are included.﻿
Facsimile professional reprint