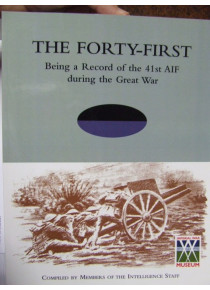 THE FORTY-FIRST BEING RECORD OF 41st AIF WW1 MILITARY BOOK

The Forty-First Being a Record of the 41st AIF during the Great War '
compiled by Members of the Battalion's Intelligence Staff.

This Battalion History Book was compiled by Members of the Battalion's Intelligence Staff. The writing of the Battalion's formal history was commenced before the Battalion returned to Australia in 1919. Follows the 41st Battalion 1st AIF history from its formation in Queensland. Training at Bell's Paddock Brisbane then onwards to Sydney and London. The 41st Infantry Battalion entered the front line in France for the first time on Christmas Eve 1916.
The Battalion saw service in many Battles, Messines , Broodseinde Passchendaele
during 1917 on the Western Front. During Spring 1918, the Battalion was at the forefront in stopping the German advance. They contributed to the rally of the Allied Forces at the Battle of Amiens later in 1918. This is the Official Battalion History. The book was first published in 1919. The book offered is a professionally produced facsimile reprint of that history.

It is a true reproduction of the 1919 edition. Of course the original copy of
this history is rare with a cost being many hundreds of $. Even these reprints
escalate in value when they become out of print. Here is your chance to obtain
this book that can be treasured as a hand me down Family History Book. 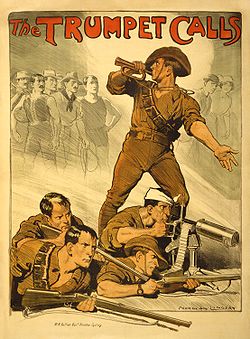 These Queenslanders of the 41st Bn Answered the Call!