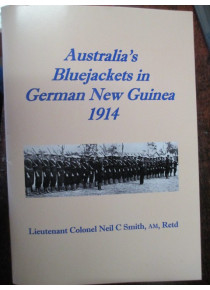 History of the Naval Troops with the ANMEF WW1

This book lists the operations and importantly for the first time, the most up-to-date nominal roll of the naval unit of the ANMEF. On 11 August 1914 The Director Of Australian Naval Reserves reported that he could raise a naval contingent of 500 men without any difficulty for the New Guinea operations. He consequently sourced 200 men from Sydney, 100 from Melbourne, and the remainder from the other states. The naval component of the ANMEF has been thought to have been based on about 500 reservist sailors. But there were many others who were serving on the ships and therefore landed on or about 11 September 1914 near Rabaul New Guinea. The author, has recorded a comprehensive history of this naval unit including many scarce photographs.

The book concludes with the Honours and Awards Roll of the naval members of the ANMEF who were decorated for gallantry and conspicuous service during the campaign. The remainder provides a detailed Nominal Roll Of the Naval Expeditionary Force.

This book would be of high value, to medal collectors and family researchers of the sailors who took part in Australia's first Battle of
World War I.﻿