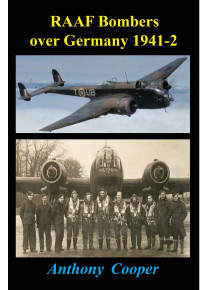 This is the story of three Australian RAAF bomber squadrons during WW2. Flying with RAF Bomber Command in the early part of Britain’s bombing offensive against Nazi Germany, from August 1941 to September 1942.

This campaign saw the only major and ongoing Australian contribution to the war against Hitler’s Germany.
It was proportionally the bloodiest in Australian and British military history, with the survival rate among the aircrews dropping by Autumn 1942 to about 25 percent.