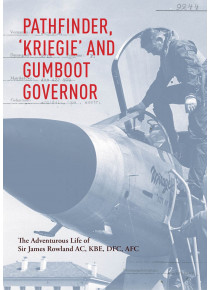 James Rowland at just 22 years old, became a Lancaster pilot in the elite Pathfinder force, flying 34 missions over occupied Europe and being awarded the Distinguished Flying Cross. In January 1945, he was the only survivor of a collision with a Canadian aircraft over Germany. After narrowly escaping being shot as a spy, he spent the rest of the war as a POW.

Returning to the RAAF in 1947, Rowland was a test pilot during the early years of the supersonic era, and played a leading role in the Mirage procurement. His leadership qualities and technical expertise saw him become head of RAAF engineering in 1972, and, in a controversial appointment, Chief of the Air Staff in 1975, the first and still the only engineer to head the RAAF.

In 1981, Rowland was appointed Governor of New South Wales, a position he held with distinction for eight years.
A brilliant pilot and aeronautical engineer, who combined a strong commitment to duty with a great sense of fun, Rowland has a well-earned place among the great leaders of the RAAF.