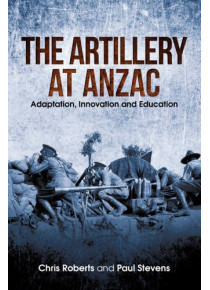 The first comprehensive study of the use of artillery and naval gunfire support at Anzac. Faced with huge difficulties on inferior ground the Australian, New Zealand, Indian, and British gunners quickly adapted to a hostile environment, employing innovative techniques to counter superior numbers of Ottoman artillery and provide fire support to their infantry and light horse colleagues. How well they performed is a central theme of The Artillery at Anzac.

Using a host of primary sources including official manuals, war diaries, operation orders, letters, and private papers the authors trace the story of this neglected feature of the Gallipoli campaign. Commencing with an evaluation of the nascent pre-war Australian and New Zealand artillery, they take the reader through the testing introduction to the realities of modern warfare, the trials and difficulties the gunners experienced throughout the campaign, to the phased evacuation in December, without alerting the Ottomans to the re-duced number of guns. Along the way, they challenge a long held controversy concerning the light horse charge at the Nek, and evaluate the effectiveness of the fire support provided to the infantry attacks, including that at Lone Pine, the attacks on the Sari Bair Range, and at Hill 60.  In doing so, the authors illuminate long-buried information to provide new and penetrating insights into the campaign at Anzac.