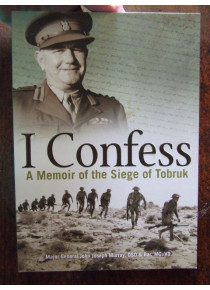 I Confess A Memoir Siege of Tobruk Australian Commander Murray

The torturous siege of Tobruk has been captured in this compelling war book from Major General John Murray, commander of the Australian 20th Brigade which comprised of the 2/13th, 2/15th, and 2/17th Battalions. The brigade in Tobruk was part of the 9th Division﻿- they were the Rats of Tobruk. His humorous and engaging story is not only one of raging battles, but also of the command of the Rats of Tobruk .

Murray was a good story teller and in ' I Confess ', he captures the essence of what our ‘ancestors’ experienced in that war. His memoir is a portrait of the relationship he forges with his men through the long days of the siege against a relentless enemy as supplies dwindle, tempers fray and exhaustion threatens.

Written in April 1945 as the war entered its final phase Murray captures his story, not as war history, but as tales of men, their hardships, their relationships and their adventures. Incorporating maps, photographs and speeches, I Confess, is a wonderful tribute to not only a courageous and determined officer but also to those men he led through two world wars.