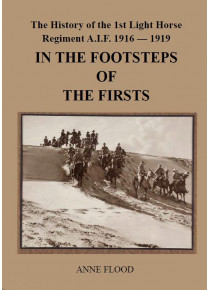 The Footsteps of the Firsts tells the story of the 1st Australian Light Horse Regiment from 1916 to 1919 during World War One. The history of the Regiment is told in the words of soldiers who wrote letters home, newspaper articles, operational diaries and the Regiment commanders as they daily penned the unit diary in the field. Every man of the Regiment who died is named with details of their background, service and burial.

To Honour of the Fallen, the author Anne Flood has fulfilled a commitment to keep their memories alive throughout the towns and cities of New South Wales that they called home. This book is an invaluable resource for historians, family of members and future generations. Anne Flood invites the reader to “come find your soldier in these pages”.

After the return from Gallipoli of the 1st Light Horse Regiment the unit was immediately refitted for duty in the Sinai and Palestine arenas.

Initial battles were fought at Romani on 4– 13 August 1916,  Maghdaba 23 December 1916  and Rafa on 9 January 1917. Then came the disastrous defeats at Gaza that was finally won on 7 November 1917 after the well known outflanking move at Beersheba that involved all Light Horse Brigades. However Beersheba water was insufficient for all brigades and the move to Tel El Khuweilfe proved just as costly to the Regiment as Beersheba.

After Beersheba, while the Infantry fought their way to Jerusalem, the Light Horse Brigades made the advance to Jaffa sweeping the enemy back.  After the capture of Jerusalem in December 1917, Jericho was taken in February 1918, securing the West bank of the Jordan for Allenby. However the raids on Amman and Es Salt, that followed in March and April 1918, were crushing defeats, denying Allenby a foot on the Eastern bank of the Jordan.

The Anzac Mounted Division spent four months in the Summer inferno of heat and mosquitoes in the Jordan Valley. On 14 July the Regiment as part of the 1st Light Horse Brigade secured a resounding victory for Chauvel over German Storm Troopers at Abu Tellul, the last offensive move by the Enemy in the Valley.

The final British offensive of the campaign was launched along the Mediterranean coast on 19 September 1918, with the Battle of Megiddo that involved the ANZAC Mounted Division including the 1st Light Horse, taking  Es Salt and Amman. Turkey surrendered on 30 October 1918. The 1st Light Horse formed a colour party in Amman for the raising of the Hejad flag. Back at Rafa in January 1919 plans were made for demobilisation and return to Australia. The horses were classified by age and condition into four groups: those injured or unfit for further service were humanely destroyed by Veterinary Services and a number of riders made the heart-breaking  decision to put down their own horses. The remainder were sold to British, Indian and Finnish armies.  The Light Horse Regiment embarked from Kantara on 12 March 1919, arriving back to Australia 24 April, 1919.

The chapters of well-written history are supported by extensive references to the 1st L.H. Regiment Unit Diary, each day 1916 - 1919,  Gullett’s Official History, soldiers’ diaries and letters to loved ones back home some published in local newspapers. Extensive use of fifty photographs and twenty detailed maps enable the reader to build up a clear visual picture of the Regiment’s history and details of Battles.

This book is a credible unit history with the inclusion of all nominal rolls 1914 – 1919.  All soldiers who paid the ultimate sacrifice are named with details of their background, service, death and burial on the day of their death. Commendations and awards are included.

The History of the First Light Horse Regiment on Gallipoli (Period 1914 to December 1915 is covered in Anne Flood's book In the Footsteps of the 1st Light horse (click to see).