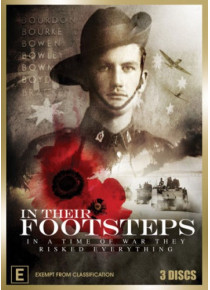 In Their Footsteps : new dvd

As seen on Channel 9 this was a very popular war documentary series. This DVD consists of 3 DVD Discs total duration 443 mins.

In Their Footsteps is a 10-part series which takes todays family members back to the battlefield to investigate and relive the part that their veteran relations made in many Australia's most famous war battles. The series moves through the many aspects of the battle discussing personal details but also relates to the general challenges, deprivations and lasting scars of war which effected all the soldiers.
' In Their Footsteps ' shines a bright new light on Australia's wartime history bridging the past to the present for a modern generation of viewers.