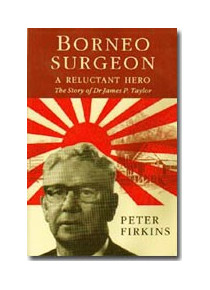 In a very moving Foreword to this book Dr Frank Mills writes. "Out of the tragic shambles that was Sandakan, Peter Firkins has produced a heroic figure comparable in courage and selflessness to that of the legendary 'Weary' Dunlop, and whose story should be known by all Australians in the same way.

Almost by pure chance he pursued his medical career in an outpost of the British Empire then known as British North Borneo at Sandakan. As Principal Medical Officer at the time of the Japanese occupation during World War II he looked after Sandakan POWs.

The Japanese allowed the civilian medical staff to remain at their posts with the status of 'simple confinement' while at the same time the bewildered local people looked to someone for leadership in their new and unaccustomed circumstances.

Aided by his wonderful wife Celia he was imperceptibly drawn into the key role of organising the underground movement among loyal native and giving support to the Australian Prisoners of War transferred to Borneo from Singapore. In 1943 he was exposed to the Japanese, arrested and terribly tortured.

Mercifully, Dr Taylor and his wife survived their internment and survived to return to Australia and lead a normal life."