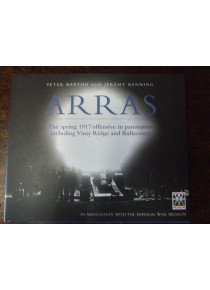 This book exhibits many previously unavailable wartime panoramas of the WW1 1917 Battlefields which the author has matched to his recently taken photographs of the same area. I like the then and after pictures valuable when visiting the Battlefields. I guess the panoramas were found at the Imperial war Museum London. The big Australian Battles of 1917 - the two Bullecourt battles are well covered. When this book was originally released I think the price was $90.00 !﻿

In spring 1917, Allied troops on the Western Front began the largest ever artillery barrage on German positions, using over 2.7 million shells. During the battle they succeeded in capturing the famous Vimy Ridge. But the ultimate cost of fighting was immense, with a daily casualty rate 40 per cent greater than the Somme and almost double that of Passchendaele - making it hour for hour the most dangerous major campaign of the First World War.

In this major new account of the conflict, Peter Barton showcases over 50 re-discovered British and German panoramic photographs of the battlegrounds, from the start of the first Battle of the Scarpe to the final push on Vimy Ridge.

Taken at huge personal risk by specialist photographers, they reveal what no other photographs can - the view beyond the trench parapet - and a view not seen for over 90 years.

Also included are unpublished testimony, letters and memoirs from the different serving regiments, sourced from archives across the UK, Canada, Germany and elsewhere; and stunning mapping, plans and diagrams throughout. In association with the Imperial War Museum.
﻿