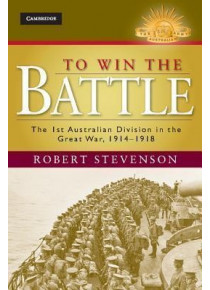 In 1915 the 1st Australian Division ( including 9th 10th 11th Battalions) led the way ashore at Gallipoli. In 1916 it achieved the first Australian victory on the Western Front at Pozieres. It was still serving with distinction in the battles that led to the defeat of the German army in 1918.

To Win the Battle explains how the division rose from obscurity to forge a reputation as one of the great fighting formations of the British Empire during the First World War, forming a central part of the Anzac legend. Drawing on primary sources as well as recent scholarship, this fresh approach suggests that the early reputation of Australia's premier division was probably higher than its performance warranted.

Robert Stevenson shows that the division's later success was founded on the capacity of its commanders to administer, train and adapt to the changing conditions on the battlefield, rather than on the innate qualities of its soldiers.