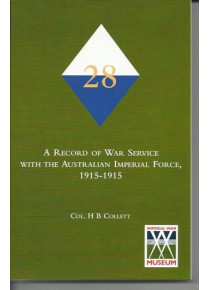 28th. A RECORD OF THE 28TH BATTALION AIF GALLIPOLI BOOK ﻿

This war book is the Battalion History of the 28th Bn Australians in the Battle Gallipoli  WW1. 28th. A Record of war service with the Australian Imperial Force, 1915 Vol 1 '
by Col. H B Collett. Before the war, Collett commanded the 88th Perth Infantry and at the start of the war he became the Blackboy Hill Camp Commandant. On the 23rd April 1915, he was appointed to the AIF as Lieut. Colonel commanding the 28th Battalion. On the 29/7/1916 during the Battle of Pozières he was wounded by a gunshot to the arm. He was Companioned with a C.M.G., was awarded the D.S.O. and also mentioned in dispatches for services during the war. After the war he became the General Secretary Public Library, Museum & Art Gallery of Western Australia and later served as a Senator for Western Australia. He died in 1947. Collett first published his work in 1922.

This book being offered is a professionally produced reprint of that history.
Full history of the Battalion from formation in Perth ( Blackboy Hill) onto
Egypt and Gallipoli. Comes with Nominal Roll and Awards Roll. This was written
as Volume One of what was proposed as a 2 volume history. However the other
volume was never completed.

May be of interest that Henry K Kahan a former NCO of the Battalion wrote  The 28th Battalion AIF A Record Of War Service   1915 - 1919  in 1968 but it was only distributed to a small number of surviving members of the 28th Battalion Association. A professionally produced reprint of that history is now available - Click link above.
Also highly regarded military book author Neville Browning has written a comprehensive history of the whole 28th Battalion. Click here to see this 28TH Battalion History book.

Click to see the wikipedia page of the 28th Battalion AIF