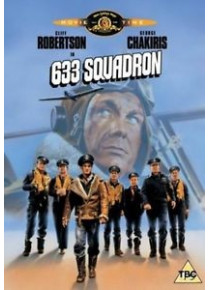 Only recently released on DVD this movie will be of interest to all WW2 Aircraft enthusiasts.﻿

633 Squadron is a 1964 British war movie based on raids made by RAF Mosquito Fighter Bombers - fictionalised drama.﻿

Importantly at the time, 9 actual de Havilland Mosquito aircraft were used for filming sequences. All these aircraft are now 'on show only' in various museums throughout the world with one being stored by RAF.

Messerschmitt Bf 108 were used instead of 109 model.﻿ It was said during filming that the director "commanded the 14th largest air force in the world" at that time﻿.

Also the check out the website the Mosquito Museum