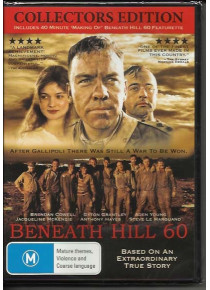 Click to here to see a trailer for Beneath Hill 60 DVD movie now:﻿﻿

Beneath Hill 60 is an Australian feature film set underneath the trenches of World War One. This never-before-told Australian story. During 1916 and early 1917 in Belgium, a Queensland miner Captain Oliver Woodward (played by Brendan Cowell) - under-trained and never having faced hostile fire before - finds himself on the Western Front the bloodiest battlefield in history. Deep beneath the German lines, Woodward and his secret platoon of Australian tunnelers fight to defend a labyrinthine tunnel system packed with high explosives. It's a silent and savage war where one tiny sound can turn a man from hunter to hunted.

The film is based on the memoirs of Captain Woodward of the 1st Australian Tunnelling Company, which was responsible for some of the mines set under 'Hill 60' - an elevated point that dominated that part of the killing fields of Belgium south of Ypres. Set during the period just prior to the Battle of Messines 1917.

The tunnellers' bravery in developing these underground mines and the subsequent massive explosions broke the gridlocked trench warfare of the previous three years! After two years of claustrophobia, bloodshed, Triumph and heartbreak, it all comes down to a single moment. As infantrymen quietly fix bayonets in the darkness, Oliver Woodward crouches in a muddy bunker preparing to press a detonator that could change the course of the war.

This is an unforgettable story of Australian WWI history and the secret struggle beneath the Western Front that combined daring engineering, technology and science and the glorious spirit of these men who fought and died for their countries.

Includes a 40 minute 'Making of' Beneath Hill 60 Featurette.

ALL DVDS ARE NOT PIRATED, BURNT OR IMPORTED. THEY ARE GENUINE AUSTRALIAN REGION (4) {UNLESS OTHERWISE STATED SEE 'BOOK CONDITION' TAB ABOVE} DVDS BOUGHT FROM LOCAL MOVIE DISTRIBUTORS. BUY WITH TOTAL CONFIDENCE.﻿﻿﻿