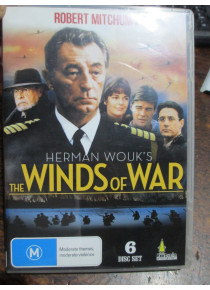 Based on Pulitzer Prize-winning author Herman Wouk's epic novel, THE WINDS OF WAR captures the world changing events leading up to WWII and the Japanese attack on Pearl Harbour in 1941 in this award-winning miniseries event presented on 6 discs.
Robert Mitchum stars as Victor 'Pug' Henry, a career naval officer who must carry out his duties during the turbulent developments in world affairs in the late 1930s. While Germany expands and proceeds to seize several border countries, Italy attempts to establish a Fascist Colonial Empire under Mussolini and Japan prepares for a major battle with China. Meanwhile Victor and his family become drawn into the centre of the conflict as they come to terms with international tension and deal with the concomitant drama, tragedy and heroism that lead to America's involvement in World War II.
Winner of three Emmy® Awards, Winds Of War features an all-star cast, including Ali MacGraw (Love Story), Jan-Michael Vincent (Big Wednesday), Topol (Fiddler On The Roof), Peter Graves (Mission:Impossible), Victoria Tennant (Flowers In The Attic) and John Houseman (The Paper Chase).

Media is Pre-Owned
This DVD is Pre-owned - It Is in Near New Condition and has been tested and guaranteed to work
DVD Information:
Australian made Region Free
DVD Duration Time minutes:
843 minutes
Movie Format:
4:3 Aspect - PAL Format - DVD - Colour
DVD Special Features:
Several Special Features about the movie